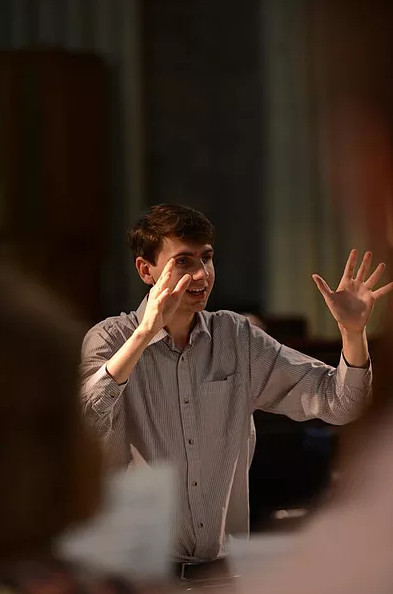 George Parris is a singer, conductor and scholar of early-twentieth-century Anglo-Irish music. He was awarded the Elgar Society's Certificate of Merit for initiating an Elgar Festival as his school, St Edward's Oxford. In the same year, he founded The Carice Singers, and has since directed the choir in a number of concerts and recordings. While studying at Cambridge, he was Artistic Director of the Sidney Sussex Arts Festival 2013 and inaugurated the Lady Frances Song Competition, a university-wide contest for solo singers. He is currently a Stipendiary Clerk with the Choir of Magdalen College, Oxford and works at Longborough Festival Opera. His dissertation considers how Arnold Bax constructed the West of Ireland as a 'Celtic' Other in his early tone-poems.

Richard Adams: Your choir, the Carice Singers, takes its name from Sir Edward Elgar’s daughter. What was the reason for using Carice Elgar’s name for the choir?

George Parris: Well, the choir could be seen as a continuation of Carice’s efforts to keep her father’s music alive, performed, and remembered throughout some pretty tough times during the twentieth century, but I think for us what’s more important is that it’s quite a quirky eponym. Carice was a very interesting character, and her relationship with her father involved a lot of japes and fun, underneath which seemed to lie a deep sense of loyalty and commitment, instilled most famously by her mother. We did think about changing the name a few years ago (it often gets mispronounced to ‘Caprice’ etc.) but the choir felt that the concept and the story was well worth keeping.

RA: Everything about this choir is young – from the age of the choir to the ages of most of your singers and conductor. Is it an intentional choice to use young voices and how does that impact the music you’re performing?

GP: It’s not an intentional choice, no. It just so happened that when we all met and started becoming a particularly strong group of friends we were all 17, or 18, and wanted to have a go at giving some concerts ourselves. Over the past five years, the balance between socialising and performing music to a high standard has remained equal, and this has become a gelling point for the group as its members have moved on in their careers, out of university and into jobs. Our members are now based all over the UK, from Edinburgh, the Isle of Man, to Cornwall, and it wouldn’t be the point if we only existed to give concerts.

Many reviewers have found a freshness of tone to our sound, which is great, but in a way I’m more proud when the fact that we are a very good group of friends is noticed. I feel that this is a more important element of our singing, as we don’t hold back on energy and imagination, and the singers are willing to experiment with their singing in a very supportive environment. As a conductor, it’s easy to encourage, but hard to refine; when this does happen, however, the results are electric.

RA: The emphasis of this choir thus far seems to be on British music. Is that accurate to say?

GP: Yes, performing British music takes up a good 80% of our efforts. This is mainly due to the fact that I spent much of my academic studies researching early-twentieth century music (Elgar especially, but also Bax, Moeran, and Warlock). I became a great advocate of it, and wanted to share my enthusiasm among my peers. It seemed a great idea, therefore, to use the choir as a way of exploring the choral items by these composers, and there are still many other pieces I’d like to perform. But I’m always very keen to present British music in its European context, and in fact we have just begun a new project which focusses on Nordic choral works from the early-twentieth century. There are some fascinating crossovers – Grieg was obviously a huge influence on Delius, via Percy Grainger; Moeran took a great deal from Stenhammar, and some of the Finnish composers we have been exploring – Kuula and Madetoja – fit really well into a Baxian/Delian mode of nature-mysticism.

RA: Your most recent disc includes the music of E.J. Moeran and John Ireland -- two composers who were friends and whose musical styles bear some resemblance. What’s been the response to that album as well as your earlier album of Warlock’s choral music?

GP: There’s been an excellent response, I feel, and we’ve all been encouraged a great deal by everyone’s comments and reviews. It’s obviously quite a nerve-wracking thing making a disc when you are twenty years old, so it was incredibly rewarding to read and hear that many listeners have appreciated both discs, and it really spurred me on to make these next two discs. The music really helped us though – such well-crafted pieces which were a joy to record.

RA: You’ve just recorded a disc for Naxos combining the works of Bax with Frederick Delius. What inspired you to program these two composers together? Do you think their musical styles complement each other?

GP: All through my research Bax and Delius have stood out to me as two giants of the British music scene. They do have quite similar biographies: both experienced some kind of teenage rebellion and were of wealthy enough backgrounds to travel to wherever they liked and became heavily inspired by the nature and local inhabitants of these places (Ireland for Bax, and Florida for Delius). They both also seemed to have come to rather sticky ends which were perhaps the result of having too frivolous a youth. Above this, however, they had a highly individualistic approach to their art and were steadfast to their own eccentric visions despite what anyone else thought of them. This is what fascinates me more, in a way, than any stylistic similarities.

RA: How did you choose which works by Bax to include? Are there works you had to leave off the program due to time?

GP: I didn’t intend on making a definitive album of all of Bax’s choral music, and sadly had to leave off pieces like What is it like to be young and fair, and Now is the time of Christymas. It’s not that there is anything wrong with these pieces, but that I wanted to provide a selection of his best works so that it would have maximum effect on those who might be interested to explore his music further.

RA: “Mater ora Filium” is regarded by most Baxians as one of his greatest masterpieces. Would you agree and what is it about that work that makes it so individual and remarkable?

GP: I would certainly agree, but it is perhaps a very different piece to what might also be considered his other masterpieces. First off, it was clear to me that this piece was conceived with orchestral proportions in mind (despite the fact that Byrd’s Mass for Five Voices had inspired it). So I began to work through the piece, sketching in various instruments at certain moments (warm strings and loud horns quite often featured in my rendition). Perhaps the most remarkable feature is the mediaeval atmosphere which it exudes, through which moments of post-Wagnerian writing penetrates. It’s a very exciting juxtaposition which constantly keeps you on your toes!

RA: We don’t really think of Bax as a choral composer but based on the choral music of his that you know, do you think he made an important contribution to the British choral tradition?

GP: I think he did, but I’m not sure whether he would have been happy with that accolade! All of his choral works require virtuosic singing, in one way or the other. For that reason, I don’t think Bax was trying to cater for the same kind of singers that Elgar or Parry were writing for. Like Delius, Bax seems to have considered a choir and an orchestra on an equal footing, and this can be seen in works like Enchanted Summer where the choir and orchestra combine to offer a hybrid. But yes, in regards to where choral writing was heading in Britain in the twentieth century I think he made a vital contribution that is unfortunately all too often overlooked. I would love for this disc to change that.

RA: Bax wrote a handful of big choral works for orchestra and singers such as Enchanted Summer, Walsinghame and To The Name Above Every Name. Do you have any interest in someday performing those works?

GP: Absolutely, if the opportunity ever arose! One of my favourites is The Morning Watch, actually. If I could find an orchestra willing to do this, I think it would work incredibly well among a programme of Sibelius, or perhaps even Madetoja.

RA: Do you have any interest in Bax’s non choral music? What led you to Bax in the first place?

GP: I first came across Bax through his choral music: I performed both I Sing of A Maiden and This Worldes Joie with the Cambridge University Chamber Choir. But I didn’t become properly involved with him until my Master’s degree at Oxford. His time in Ireland became the subject of my dissertation, which looked at the early tone poems (Into the Twilight, In the Faery Hills, and Roscatha) and how they were indicative of a Celtic ‘Other’. I really do have a great admiration for many of Bax’s works, so it is a great privilege to be able to record the choral music.

RA: How did the choir respond to signing Bax’s choral music? Is it as difficult as it sounds?

GP: They loved it. Bax gives each voice part so much to do; often it’s like each part has its own melody. This obviously makes the music quite challenging, but the choir relished the opportunity to be stretched. In many ways it’s just what we need at this stage in our careers. But there were some surprises, actually, in that some of the more difficult looking pieces, such as the Five Greek Folksongs, were so well crafted that after a while things seemed to click into place. The challenge we had with those pieces was to really lift them off the page, and bring them to life.

RA: What are your future performance and recording plans?

GP: We will be performing Bax’s Five Greek Folksongs at the English Music Festival on Monday 29th May. Those interested in our other forthcoming concerts should keep an eye on our website or on our Facebook and Twitter pages: https://www.thecaricesingers.co.uk/.