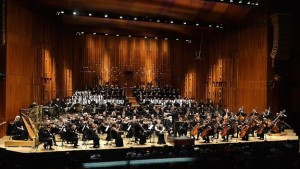 Live concert performances of orchestral Bax are not an everyday occurrence in London nowadays, so it was good to learn that Sakari Oramo would open his concert with the BBCSO at London’s Barbican Hall on 13th April 2016 with The Garden of Fand. The pleasure of the occasion was heightened for this writer by the company of fellow-Baxians Rich Adams, Graham Parlett, Chris Webber and Chris Atkinson.

Bax wrote his great triptych of tone poems, The Garden of Fand, November Woods, and Tintagel during the Great War. His work had already begun to exhibit significant impressionistic influence; Spring Fire, for example, written in 1913, evokes Ravel’s Daphnis et Chloé and, like Ma Mère L’Oye, uses glockenspiel, celesta and harp in its glowing, airy orchestration. Fand, the first of these three tone poems, though based on Irish folklore, is also overtly impressionistic, with strong echoes of both Ravel and Debussy.

If one mark of greatness in a composer is that his work supports a variety of interpretative approaches and receptive responses, then Oramo made a compelling case for Bax’s inclusion in this pantheon. His approach was impressionist, certainly, but this was not the hazy, muted impressionism of a Monet or a Turner, such as might perhaps be evident in the recorded interpretations of Barbirolli or Bryden Thomson. Rather, Oramo evoked the colours and textures of Manet or Morisot, brighter and clearer-edged.

The performance began somewhat tentatively, with perhaps a hint of uncertain intonation in the woodwinds, but soon blossomed into a series of surging washes of orchestral sound, with glorious solo contributions from clarinet and flute. It is always most thrilling to hear a live Bax orchestral performance; to experience one of this quality, casting new light on the work, was a particularly rewarding experience. The enthusiastic audience reaction suggested that performances like this will win new converts for Bax and one can only hope that Oramo, with his Sibelian and Elgarian symphonic credentials, will one day turn his attention to a Bax symphony.

Fand was followed by the Viola Concerto of Brett Dean, the Australian former viola principal of the Berlin Philharmonic and now a BBCSO artist-in-association, who took the solo part. The concerto inhabits a mysterious, enigmatic and distinctive sound world; a real ‘find’ – here, one felt, was a modern piece that would endure.

Of Elgar’s place amongst the greats there can be no doubt and, in a performance of the First Symphony, Oramo cemented his reputation as an Elgar interpreter of individuality and distinction. The reading was bold and arresting, with very brisk basic speeds for the opening and closing movements contrasting with a lingering tenderness in the more tranquil moments. Oramo showed that he appreciated the importance of the bass line in Elgar’s music by drawing powerfully assertive playing from the lower strings and by placing the lower brass in an elevated position at the back of the orchestra, from where trombones and tuba sang out a rasping, spine tingling chorale in the more climactic moments. The BBCSO responded with evident virtuosity and commitment and the conductor’s spontaneous shout of triumph at the close of the performance was echoed by an ecstatic audience; altogether an Elgar 1 to treasure.

Before the concert, the writer happened to remark to his companions, in a different context, that, once in a while, one experiences an occasion that sears itself indelibly into the memory. This concert proved to be just such an occasion; truly one to remember.